Flippenout utilizes top professional athletes from all around the country. Skis, snowboards, Olympic type routines, and of course plenty of comedy are all part of the act. Our shows keep the hype up with our awesome soundtrack and action packed from start to finish. You will see single, double, and even triple flips in every show. Every show ends with our world famous belly drops. 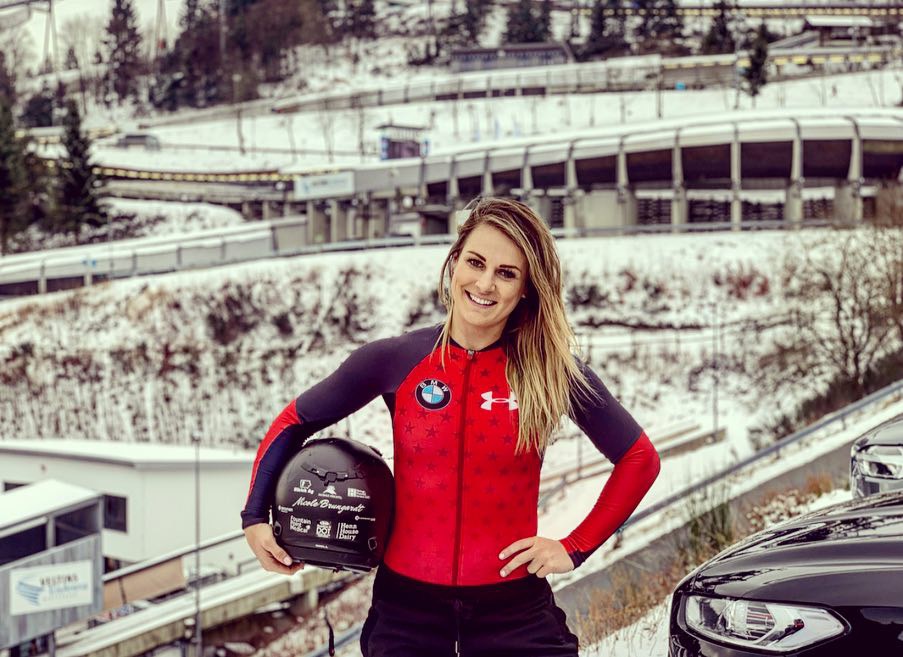 Brungardt was a standout athlete at Norfolk Catholic High School where she earned the Omaha World-Herald and Lincoln Journal Star Female Athlete of the Year Award in 2008. She later starred in both volleyball and track at Wayne State College. Her full bio and video story are available at TeamNicoleUSA.com.

Brungardt recently wrapped up a rookie season that saw her rise to a top-10 position in the world with a 9th-place finish in the two-man women’s division at the World Bobsled Championships in Whistler, British Columbia.

Nicole played volleyball, basketball and ran track throughout her four years in high school and started on the varsity team in volleyball and basketball from her very first game as a freshman. Nicole led her basketball team to a state championship title her senior year and runner-up title her junior year in 2007.

Nicole won three gold medals on the North American Circuit her rookie season, making her an up-and-coming star in the sport of bobsled.

That was the situation facing the Concordia women’s basketball team, which won the regular season and postseason Great Plains Athletic Conference (GPAC) championships in the 2017-18 season. The Bulldogs lost just one game all year long, but ultimately fell 82-59 to Dakota Wesleyan in the championship game.

The difference between simply good teams and great teams is how they can respond to adversity, and Concordia showed its greatness in the 2018-19 season. Led by senior forward Quinn Wragge and junior forward Philomena Lammers, the Bulldogs were once again regular season and postseason champions in the GPAC.

But the question still remained – could Concordia overcome its championship game loss and claim the program’s first national title?

In the NAIA Division II Women’s Basketball Tournament, Concordia roared out to three impressive victories before coming up against Northwestern College in the semifinals. Lammers scored 28 points to lead the team to an 82-79 victory and a shot at the national championship for the second year in a row.

A well-rounded team effort in the title game helped propel Concordia to a 67-59 win and secured the Bulldogs their first-ever national championship. It was a tremendous season for Lammers, who received First Team All-American honors and head coach Drew Olson, who was named NAIA Division II Women’s Basketball Coach of the Year.

The Nebraska Sports Council is proud to continue its Cornhusker State Games tradition of honoring championship Nebraska athletes and teams by hosting the Concordia University Women’s Basketball team.  The Bulldogs will be on hand for a meet-and-greet at SportFest and will take a victory lap with the Torch just prior to the introduction of the Mystery Torchlighter. Well done, Bulldogs! 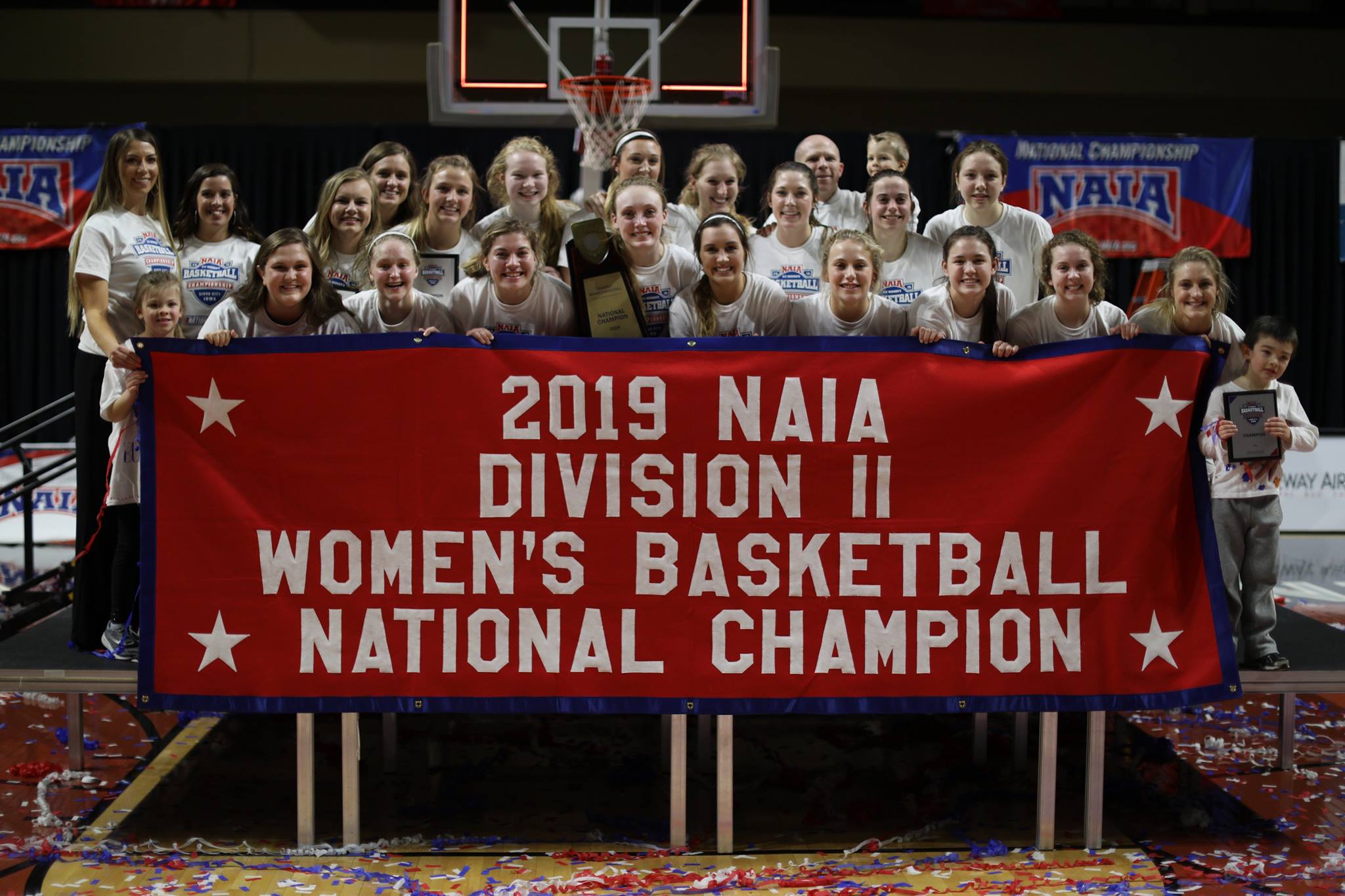 Prior to the Opening Ceremonies, athletes and guests are invited to enjoy SportFest from 4:30 to 7 p.m. in and around East High School. Attractions include the athlete meal, compliments of Arby’s of Lincoln, LinPepCo and Hiland Dairy, Exhibitor Booths, National Guard Chopper Display and a Lincoln Fire & Rescue Truck Display. At 7:15 p.m., SportFest closes and athletes move to the parade-staging area in the park between East High School and Seacrest Stadium.

The Opening Ceremonies begins with the traditional parade of athletes, sponsored by BNSF Railways. Here, the stars of the show, Cornhusker State Games athletes, get rock-star treatment, entering the stadium under a fogging archway, waving commemorative parade flags in front of the grandstands to cheers and applause before taking their seats in the east stadium.  The parade is traditionally led by a prominent sports figure crowned as the Parade Marshal.

Skydivers from the Lincoln Sport Parachute Club then make their entrance from above, followed by the presentation of colors by the Nebraska National Guard. The Star Spangled Banner will be performed by the winner of the state-wide National Anthem Contest, sponsored by Amigos/Kings Classic.

Athletes will then recite the Oath of Athletes, led by Team USA  athlete Nicole Brungardt, who will represent the USA Bobsled team in the World Championships.

Then comes the entertainment!  Flippenout utilizes top professional athletes from all around the country. Skis, snowboards, Olympic type routines, and of course plenty of comedy are all part of the act. Shows keep the hype up with an awesome soundtrack and non-stop action from start to finish. You will see single, double, and even triple flips in every show. Every show ends with world famous sky high belly drops.

The shining moment of every CSG Opening Ceremonies is the caldron-lighting by a mystery athlete, which is followed by the opening declaration from the CSG Honorary Chairman.

The Ceremonies conclude with a rousing fireworks display, sponsored by Runza.

Cornhusker State Games officials have announced the winner of the 2019 CSG National Anthem Contest. Rachel Young, a 15-year-old from North Platte, won the online voting contest with 37.3% of the vote from over 2,200 voters.

A rising sophomore at North Platte High School, Young is on the school’s golf team, competes with the North Platte Trap Shooting Team and is a Student Council member. She also participates in marching band, orchestra, jazz band, and has performed the national anthem at venues across the state.

Registered Cornhusker State Games Athletes—FREE via their Athlete Pass, which is included in the athlete packet or team box.

A Spectator Pass for non-participants, which costs $15 and includes free admission to all CSG sport venues, can be purchased on site.

Admission to Opening Ceremonies alone is $10 for adults, $5 for students (6-18 years), free for kids 5 and under, and can be paid on site at entrance gates.

Thank you for your interest in volunteering for the 2019 Cornhusker State Games SportFest & Opening Ceremonies!

As plans come together, you will be contacted by one of our management team members with assignment details. Please be patient, as the volunteer assignment process is very time-consuming. With nearly 2,000 volunteers, our team of volunteer managers will be extremely busy over the next several months.

If you have any questions, please contact the Cornhusker State Games office at info@nebraskasportscouncil.com.