From the Air Force to hot wings, Brett Baker’s seen it all 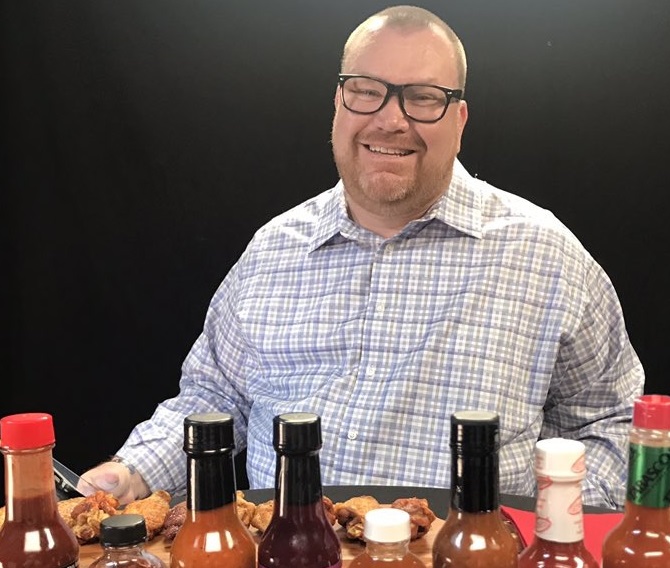 He traveled the world with the Air Force, survived a daunting hot wings gauntlet, and has two portraits of himself hanging in the Pentagon. But now, Brett Baker must prepare for his most challenging test yet — conquering cornhole at the Cornhusker State Games.

Baker spent much of his childhood growing up in Malcom, Nebraska, and after spending time at the University of Nebraska, he decided to join the Air Force, with the idea that it could help him launch a career in television news or sports. As he traveled to places such as South Korea, Las Vegas and England, Baker felt his time as an airman helped him grow personally.

“I got to see the world on someone else’s dime and got to tell the story of the world’s greatest Air Force every week,” he said. “Like Malcolm, it’s set me up for so many great things that have happened in my life, and I would not be who I am today without having served in the Air Force.”

As for his portraits in the Pentagon, Baker insists they aren’t because he was the greatest airman ever.

“At the time I was in pretty good shape and I liked to keep my uniform pretty tight, so I think I looked the part,” he said.

After his Air Force days, Baker began a career in television news working in San Antonio. He eventually returned to his native Nebraska, where he has worked as an executive producer for 10/11 News for the past seven years. In addition, he reconnected with his Malcolm roots by becoming an assistant speech coach.

“When I moved back, one of the things I wanted to do was reconnect with my school and kind of give back, because I competed with Malcolm speech and it was huge for me,” he said.

Baker stays busy with a variety of activities but his most interesting one might be his super fan status on the YouTube series “Hot Ones,” where celebrities sit down for an interview while eating hot wings which progressively get hotter. The show has attracted a wide variety of public figures including Gordon Ramsey, Shaquille O’Neal, Kevin Hart and Neil deGrasse Tyson.

And Brett Baker, of course.

Early on in the show’s history, Baker began making power rankings of guests, which quickly developed an online following of their own. After the channel hit one million subscribers, Baker flipped the tables and interviewed the show’s host, Sean Evans, and had to deal with the struggle of the hot wings as well.

“The hot sauce throws people off and they stop thinking about what they’re going to hold back and they start thinking, ‘I just want to survive, what do I need to say to get out of here?’” Baker said.

Even after all his adventures in life, Baker continues to seek others, which helped lead him to participate in his first Cornhusker State Games this year, in the sport of cornhole. Baker said he enjoyed playing the game at tailgates in the past and thought it would be a good, fun way to finally compete in the Games.

“I think it’s just an awesome thing to keep the state together, he said.” It’s good to see athletes come from different parts of the state to see each other in action.”