What is the first thing that comes to your mind when you think of March? For sports fans across the U.S, it’s March Madness. The NCAA Men’s Basketball Tournament known as March Madness is back after a one-year hiatus due to the COVID-19 pandemic. Across the U.S, March Madness is one the most exciting sports events of the year. Fans are obsessed with March Madness mainly because of the coveted bracket. Each year fans can fill out their own bracket to see who they think will win the 68-team NCAA Tournament.

At the Nebraska Sports Council (NSC), which conducts the Cornhusker State Games (CSG), we decided to do our own fun bracket called Torch Madness.

The 48-person bracket began on March 19 and will continue until April 7. Currently, the Sweet 16 Torchlighters are being voted on. There are many intriguing matchups, so make sure to check out the updated brackets, which are posted daily. Vote daily on our Facebook page: https://www.facebook.com/cornhuskerstategames/?ref=page_internal.

Visit our website to learn more about the Torchlighters and stay up-to-date with the bracket. https://www.cornhuskerstategames.com/mystery-torchlighter/ 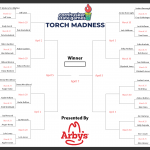