Cycling Enthusiast Shares his Passion for Sport with Others 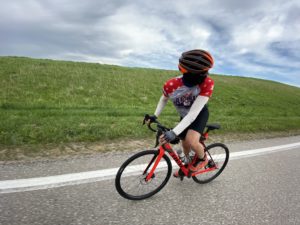 For Larry Wenzl, cycling isn’t just an activity; it’s a way of life. The Lincoln native who now resides in Norfolk, NE pours his blood sweat and tears into the sport.

Wenzl got into cycling at age 49 after going to spinning classes a few times a week to live a healthier lifestyle. He stuck to indoor cycling for a while before more recently exploring the world of outdoor cycling when his friends convinced him to buy a bike so they could all go for rides together. Indoor cycling helped him build the confidence he needed before moving outdoors. From then on, Wenzl’s outdoor cycling career took off.

The now 59-year-old is obsessed with the sport. With cycling, Wenzl is able to get outside and clear his mind. Another reason he enjoys the sport is because of how convenient it is. Wenzl began riding his bike to work giving him a way to commute, helping him save money on gas, and do what he loves, cycling.

The cycling enthusiast found a way to be even more involved in the sport when he signed up for the Cornhusker State Games in 2017. Wenzl enjoyed it so much he has participated every year since. “It’s fun because you get to meet all the other enthusiasts,” he said. Wenzl will be competing in the cycling tour event to showcase his skills this July.

His favorite part about the Games is meeting new people at cycling events and riding with them. “The comradery of sharing the event with other Nebraskans is amazing,” he said.

Another way Wenzl stays involved in the sport is by running his own social cycling group in Norfolk, called the Chipotle Riders. This group consists of 100 members in the Norfolk area who share a passion for cycling. Each Tuesday, they go on a group ride around the city as a way for people to get out and enjoy the company of one another.

Being this involved and putting in hard work and dedication has paid off for Wenzl. Over the past four years, he rode over 36,000 miles outdoors in Nebraska. Each week he tries to knock out 320 miles to stay on top of his game.

With all this cycling, it can be hard to stay motivated and maintain interest. For this reason, Wenzl keeps track of his progress by tracking his metrics regularly throughout each ride. He also buys a new bike every year to treat himself as a form of encouragement.

When it comes to competitiveness, Wenzl is most competitive with himself. He knows all of his average speeds and pushes himself to make new marks. “I just know I’m going to get my goals, whatever it is that I want to do, I do it,” he said.

For Wenzl, his goal is whatever he can get with the time that he has. He wants to continue cycling for as long as he can, as it has brought so much happiness into his life. “Cycling is life,” he said. He treats each ride with excitement and encourages others to go out and try cycling too.