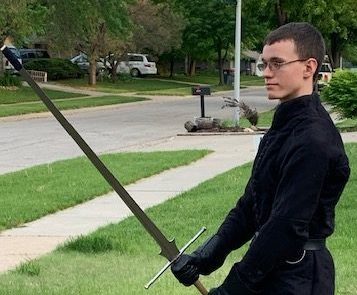 For Lincoln native Peter Schack, few things are more exciting than learning about the ancient art of the sword and trying to replicate it on his own.

Since his younger days, medieval history was always fascinating to Schack, especially in terms of knights and weaponry. Along with his father, the two of them found a local community which shared similar interests in the Nebraska Swordfighters Guild. At just 14 years old when he joined, Schack became the group’s youngest member.

“It was kind of strange being the youngest one there, but it was also kind of fun, since I got to learn all of this from a young age,” he said.

Together with his brothers, Schack has been practicing his sparring techniques for years, but this year’s Cornhusker State Games will mark his first formal competition. He will be competing in two categories, both HEMA longsword and energy sword, but it was the energy swords which truly caught his attention.

The name energy sword is simply a way to describe one of the most popular weapons in film history — the lightsaber. While different from traditional swords in terms of weight and responsiveness, Schack will attempt to carry over his established sparring skills into the new event.

“It’ll probably be fun to all the different competitors sharing the same interest, but I am nervous of the competition aspect,” Schack said. “It’ll be fun though.”

His other competition, the longsword, is also a favorite due to its historical basis. Schack said he enjoys learning about swords as a form of martial arts and especially as it relates to the historical myth of a hero.

“In modern times, swords aren’t used as much, so it’s really nice to be a part of something that tries to bring back this centuries-old tradition of martial arts incorporating a sword,” Schack said.